«[...] a whole toy box full of playful, inventive strategies for exploring cities [...] just about anything that takes pedestrians off their predictable paths and jolts them into a new awareness of the urban landscape.»1 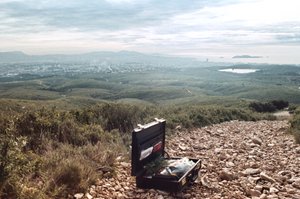 I have taken the liberty to steal a quote from the American journalist Joseph Hart as a title for this text because it perfectly fits as an introduction to your «Balades», an important part of your artistic practice.

To be able to grasp this, I need to reverse paths, search for clues. Because there are only traces and fragments that remain if I want to approach your work in retrospect. And one of these tracks is indeed quite literally a «toy box»
- A briefcase from which you have removed the side walls and replaced with transparent Perspex (in a later version). A briefcase whose original function got reversed and now does not hide its contents but freely reveals it to observers. The contents? At first glance I recognize tape, pens, notebook, fishing line, wrench, stamps, an audio recording device, a small speaker, a packet of biscuits. Less toys,
instead of tools of an urban explorer which are entirely publicly paraded.

The suitcase and its contents were props for your «Balades», a hike in and around the city of Marseilles that you had been invited to do and yet, which has been yet more than a normal walk. Because the participants were just quite literally taken off their predictable everyday paths and jolted into a new awareness of the urban landscape. In this sense, I understand the briefcase with its contents that turned out to become props for small performances games
interventions as an invitation and as a call for social interaction at the same time.

And another one of your works prompts me to seek for traces: «Lougou Bridge» (which is the title) leaves me only a video, which is rather documentation, retold or collaged memory. The video tells the story of a completely random but amicable encounter with George, a former teacher, on a nameless bridge in Newcastle, who quite by accident turned out to be a (self-taught) expert on bridges, and who brought up the idea of a different urban intervention:
George became for one day again teacher and offered to share his knowledge with random passers-by on that nameless bridge in Newcastle. The intervention was public but rather quiet, it was not announced or showcased as spectacular. Eventually it disappeared just as suddenly as it had appeared and remained puzzling for all participants - for George, the passers-by (and even for you?)

To come back to the stolen title: in his article Joseph Hart describes history and contemporary forms of so-called Psychogeography and comes to speak of the original French term «dérive», which was coined in the 1950s by the Letterists and Situationists and described a different than everyday contact with the environment and the urban space.

Guy Debord, probably the best-known representative of the Situationists published in 1958 with «Théorie de la dérive» some sort of guide to

«In a dérive one or more persons during a certain period
drop their relations, their work and leisure activities, and all
their other usual motives for movement and action, and let
themselves be drawn by the attractions of the terrain and
the encounters they find there. Chance is a less important
factor in this activity than one might think: from a dérive
point of view cities have psychogeographical contours, with
constant currents, fixed points and vortexes that strongly
discourage entry into or exit from certain zones.»2

Your «Balades» as well as interventions such as «Lougou Bridge» evolve quite similarly to social interventions which, although maybe planned in detail by you, the course of which, however, ultimately remains unpredictable. The urban space or environment, depending on the reading of the same center and scenery, the parties can be active actors or remain passive observers. As works of art, (do we really want to remain at this old fashioned term?), they add small
interference and glitches into everyday life.